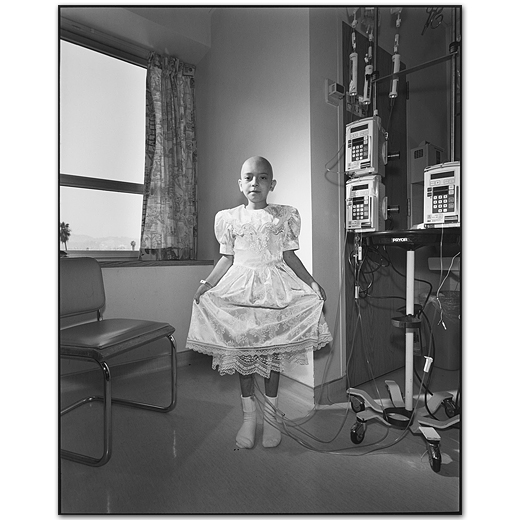 I was photographing for Peter Howe’s book project on mothers and daughters. My focus was on a mother’s loss of a daughter or a daughter’s loss of her mother. I called Dr. Stuart Siegel, who is the director of the Children’s Center for Cancer and Blood Diseases at the Children’s Hospital in Los Angeles. He is a brilliant doctor and a compassionate person. I told him what I was working on. He suggested that I photograph two children at the hospital who were extremely ill and very special. I knew whoever he suggested would be exceptional.

Ten-year-old Cynthia Calves was one of the children he suggested. Not only was she beautiful, but she had an extraordinary personality. She was a strong young soul. All of the staff on her ward loved her. Despite being constantly connected to a huge machine, she insisted on helping behind the front desk of her ward.

I wanted to make a powerful portrait of her that showed how her attitude contradicted the severity of her situation. Like any other little girl, she had a favorite dress that was perfect for the portrait.

Some months later, I spoke to her mother. She told me that Cynthia had not survived her illness.