Mother Teresa Feeding a Man at the home for the Dying, Mother Teresa’s Missionaries of Charity, Calcutta, India, 1980 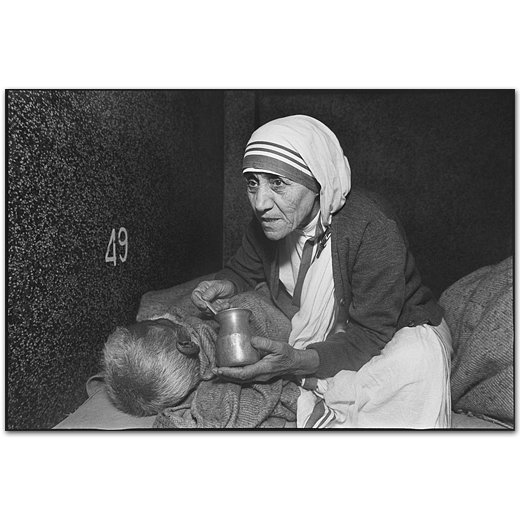 I made two trips to Calcutta to photograph Mother Teresa’s missions. The first was in 1980 for John Loengard at Life magazine. The second trip, in 1981, was for a small book (part of the “Untitled” series) for Ansel Adams at the Friends of Photography. Gaining access to Mother Teresa during the first trip was much easier. She had just won the Nobel Prize and hadn’t yet been inundated by the press.

When I arrived for the first trip, I went to the motherhouse to meet Mother Teresa and get permission to photograph at her mission houses. She asked me who Muhammad Ali was. She wanted to know because he was coming to visit her in Calcutta. Then she wrote me a note that said, “Dear Sisters, Please allow Mary Mark to take photos. God bless you. Mother Teresa.” After that, I was able to visit all of her missions and take any pictures I wanted. This photograph is a picture of her at the Home for the Dying, feeding a dying man.

When I returned the next year, access was much more difficult. Mother Teresa had been photographed, interviewed, and filmed constantly. In order to get another permission note from her, I had to wait at the Calcutta airport for her plane to arrive from Bombay. It was on its way to Nepal. I met her at the gate.

Two months went by. She spent most of the time away from Calcutta and immediately went into seclusion when she returned. Then I heard she was leaving again for a trip around India. I knew that I needed to spend time with her to take more pictures and do an interview for the Friends of Photography book. I was worried and upset at the possibility of missing her.

The next morning in the lobby of my hotel I saw a Jesuit priest I knew. He noticed that I was upset and asked me if he could be of any help. I told him that Mother Teresa was leaving and I hadn’t had the chance to spend any time with her. He said, “You must be at the motherhouse for early-morning Mass tomorrow morning.” The next morning when I got there, the same Jesuit priest was giving a sermon to all of the nuns, including Mother Teresa. The topic of the sermon was the “importance of photography.” The following day, she left for Delhi and allowed me to travel with her for a week.