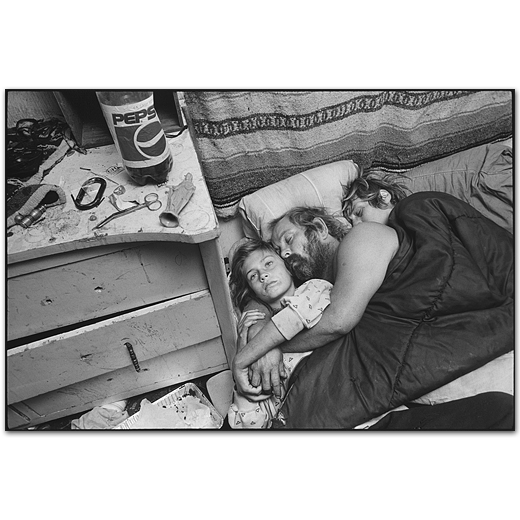 In 1994 I returned to photograph the Damm family for David Friend at Life magazine. Their living conditions were even worse than when I first met them in 1987. Linda and Dean had two more children, Ashley, 6, and Summer, 4, and immediately noticed how much better Dean was to his own children. He always treated Crissy and Jesse terribly. He screamed at Jesse constantly and one day even shaved off the boy’s hair because he got some tar in it.

The whole family was squatting in a dilapidated, deserted ranch house. It was located in a canyon in the high desert about three hours outside of Los Angeles. Dean and Linda were heavily into drugs, mostly speed. The children were not in school. There was a general atmosphere of chaos and destruction.

The house was filthy. There was no running water and no electricity. Dean and Linda had adopted about twenty dogs. Some of them were fed, while the others roamed the hills killing rabbits or whatever they could find.

I stayed at a motel down the road. Very early every morning, I would arrive at the house. This photograph of Linda, Dean, and Crissy was taken one of those mornings. I was shocked at the scene I found. The expression on Crissy’s face said everything. I didn’t know what to do, but I decided I had to take this photograph. I later asked Crissy if Dean was abusing her. She vehemently denied it. I spoke to the social worker who refused to believe what I sensed.

Some months later, Crissy finally admitted that Dean was sexually abusing her. Linda took the kids and left him. What most disturbed Dean when he saw this photograph published was that his marijuana pipe and gear were visible in the frame.